The Chevrolet SUV That Could Not Be Fixed 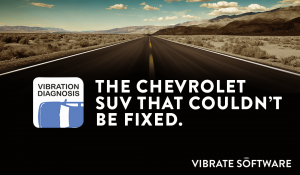 The most memorable “can’t be fixed” vehicle I have ever diagnosed was a full-sized Chevrolet SUV.

While listening to the service manager describe the history of this vehicle, I learned that in an attempt to repair the vibration, the dealership service department had replaced the following parts on the vehicle:

They had balanced the tires several times and had the new driveshafts balanced; nothing would fix this vibration. The vehicle must be a Lemon; it can’t be fixed.

Using the same diagnostic procedure outlined in our new NVH smartphone app, a few students and I performed a quick road test. The road test results indicated that the vehicle had a second-order driveshaft speed-related vibration. As the NVH app’s diagnostic help file indicates, second-order driveshaft speed-related vibrations are only caused by a few select problems on the vehicle.

While my students and I were working our way down this list of items to check, we discovered that the working angles of the universal joints of the rear driveshaft were unequal and beyond specifications for that vehicle. We performed some calculations and discovered that if we lift the transmission/transfer case mount a little higher above the cross member, the universal joint working angles will become closer to equal. We installed a 1/8 inch thick shim under the transmission mount and road-tested the vehicle again. The vibration problem was fixed.

There were no bad parts on this vehicle. Two very unhappy customers were the result. Thousands of dollars were wasted on parts, and many hours of labor were wasted because nobody knew how to diagnose a vibration problem; they were guessing! The NVH app eliminates the guesswork in vibration diagnosis and guides you step-by-step through the entire diagnostic and repair procedure. Get the NVH app today by clicking on the link below.