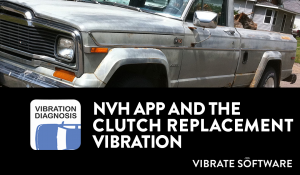 Several years ago, I received a phone call from a local, new car/truck dealership service manager requesting help diagnosing a vibration on a used pickup truck they had sold. Their service department had tried several things to repair the vibration, but they were unsuccessful. This truck had a manual transmission.

While listening to the service manager describe the history of this vehicle, I learned that shortly after the truck was sold, the customer came back to the dealership with a slipping clutch. The owner had purchased an extended warranty policy, so the clutch and pressure plate replacement was covered under this warranty.

The technician who had replaced the clutch had determined that the vibration was related to engine speed and could be duplicated with or without driving the vehicle. Somehow logic left the room at this point; the technician decided that the V-6 engine must be bad, so they replaced it under the customer’s extended warranty. As you may have guessed, the vibration was still there after replacing the engine! That is when I received the call for help.

Using the same diagnostic procedure outlined in our new NVH smartphone app, the technician working on the truck and I performed a quick road test of the Truck. The road test results indicated that the vehicle had a second-order engine speed-related vibration.

The technician and I started working our way down this list of items to check, but we could not find any problem. We checked each mount to make sure it was damping the vibration amplitude as it should; they were were good. I was thinking to myself, “This truck is not going to be as easy to diagnose as I thought.”

Just as I was getting a little frustrated, I looked up at the driveline. This is a rear-wheel-drive truck with a two-piece driveline. The front driveshaft has a slip yoke where it slips into the rear of the manual transmission, a rubber-mounted center support bearing, another slip yoke, and the rear driveshaft. I noticed that the center support bearing bracket was slid forward farther than it was out of the factory. There was a clean spot on the bracket where the bolts had been previously.

Suddenly I realized that the driveline and center support bearing/bracket was the transfer path for the normal engine vibrations to transfer into the passenger compartment by bypassing the engine and transmission mounts!

We loosened the center support bearing bracket bolts and slid it back to the same position when it came out of the factory. This allowed the slip yoke to have some slip. We drove the vehicle again, and the vibration problem was gone! I added a driveshaft slip yoke to the list of causes for transferring normal vibrations into the passenger compartment after this experience.

The cause of the vibration was the technician slamming the driveline slip yoke into the back of the transmission after replacing the clutch the first time. The technician did not allow for the slip in the slip yoke. Thousands of dollars in parts and many hours were wasted trying to fix this vibration. All of this could have been avoided had the technician or the dealership had a vibration diagnostic tool like the NVH app that is quick and easy to use.

There are close to 300 possible vibration sources on a typical vehicle today. The NVH app eliminates the guesswork in vibration diagnosis and guides you step-by-step through the entire diagnostic and repair procedure. Get the NVH app today by clicking on the link below.